Return to the Main Books Page Here!
Home > Books > Given to The Mafia Bosses: A MFM Bad Boy Menage Romance 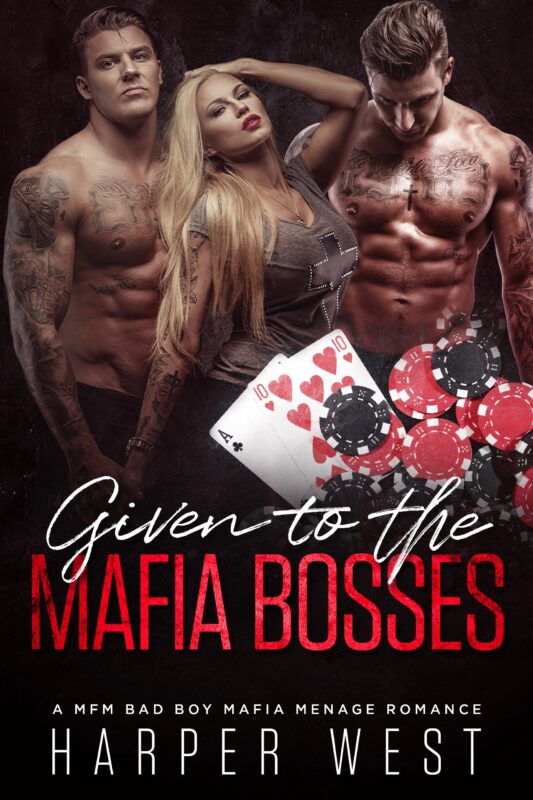 This Virgin’s first ride . . . will be on two Italian Stallions.

Marcy
Guns—crime—mischief.
This isn’t the life I expected to live.
But my lousy brother has once again dragged me into the middle of his own destruction.
He’s messed with the wrong people. Dangerous people.
And the only way to save him, is through them.
Dark, alpha, arrogant—and everything I’ve always steered clear of.
One look and I knew they’d eventually seduce me.
But I’m a good girl—smart—and I should know better.
But each second we’re together, they devour me with their eyes.
I shouldn’t tease them, but I can’t help it.
I’m in the mood to gamble . . . and it might just cost me my soul.

Lorenzo/Ronan
She’s a good girl.
Too good for men like us—but that doesn’t mean we won’t pursue her.
Cause the truth is, we aren’t the decent type.
People respect us because we command it—or else.
So when this ‘good girls’ brother loses big, we’re more than happy to make a deal.
Too bad she doesn’t know that it’s not him we’re after—but her.
We want all of Marcy, and we’ve waited long enough.
She’s an angel among devils, and we should let her go. . .
Too bad that isn’t gonna happen.

Given to The Mafia Bosses is a standalone, wickedly-hot, MFM Bad Boy Mafia Menage Romance from your new favorite author Harper West. If you’d love to ride not one, but TWO Sexy Italian Stallion’s . . . hop right on! Guaranteed HEA & No Cheating.